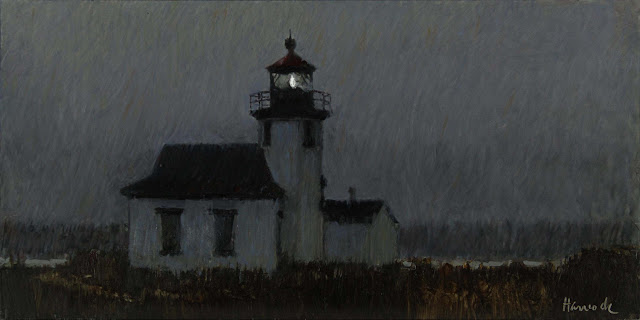 Almost night at the Point Robinson Lighthouse on Maury Island.  The 1915 Fresnel lens inside the lightroom was working until 2008 when it was replaced by a less romantic plastic beacon mounted on the walkway atop the tower.  I moved the light back into the lightroom and also moved the modern radar tower just a little bit to the right until it left the painting altogether.  I like the moodiness of the scene.  This painting will be in the Vashon Island Art Studio Tour the first two weekends of December at the Pink House in Burton 23819 Vashon Hwy SW.  Make plans to come and see.

Posted by Gretchen Hancock at 4:55 PM

Would you like to get my latest paintings emailed to you about twice a week?

Send me a message - I'd love to hear from you

Link to my Etsy store 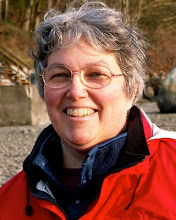 Gretchen Hancock
Vashon, Washington, United States
Welcome. I have been painting in oils and acrylics and watercolors for over thirty years. I taught watercolor and drawing at the college level and have exhibited in and won awards in local and national juried shows. I have been selling my work in galleries in Washington and Alaska. I paint still lifes and landscapes and sometimes portraits. My goal in creating this blog is to share my work with you. I would love to hear your thoughts and opinions about my painting. To contact me, visit my website at www.gretchenhancock.com and use the contact link.